To move beyond the E-myth, you have to build an enterprise rather than a business. Most small businesses are little more than self-employment situations for the founder but an enterprise functions smoothly and generates profits even without the founder's hands-on involvement.

The real challenge is not to build a business but to build an enterprise. To achieve that, you have to put four systems in place: 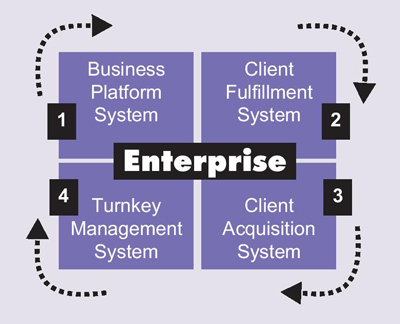 To go beyond, learn to think like an entrepreneur.

Michael Gerber is an innovator, entrepreneur and small business coach. He is the bestselling author of 29 books including The E-Myth Revisited and Awakening the Entrepreneur Within. In 1995, The Wall Street Journal named The E-Myth as the #1 business book of all time having sold millions of copies in 29 languages and being used as a textbook in 118 universities. He is also the founder of his own training academy which has served more than 100,000 small business clients in 145 countries.