Elevate Your Game, Avoid Burnout, and Thrive With the New Science of Success

By Brad Stulberg and Steve Magness (2017)

Brad Stulberg is a performance coach and writer. He is a columnist with Outside magazine and New York magazine and a writer with Rodale Inc. His articles have also been published in Forbes, Wired, Sports Illustrated, NPR, The Los Angeles Times and The Harvard Public Health Review. He previously worked as a consultant for McKinsey & Company and is a graduate of the University of Michigan.

Steve Magness is a coach at the University of Houston. He has coached some of the top professional distance runners in the world and also acts as an adviser to several tech companies. In addition to being a columnist for Running Times magazine, he has also written articles which have been published in Runner's World, The International Journal of Athletic Training, The Wall Street Journal, the NY Times and the Houston Chronicle. He is the author of The Science of Running and writes a blog at www.ScienceofRunning.com. He is a graduate of George Mason University and the University of Houston. One of his proudest achievements is he ran a 4:01 mile in high school.

How do you improve your performance in all areas of your life – personal and professional?

Today, you and pretty much every person in the workforce will be increasingly competing against machines that learn relentlessly. Artificial intelligence is exerting more and more pressure on human performance in the workplace. And if that wasn't bad enough, you're now also competing against a global talent pool.

Some people turn to performance enhancing drugs to stay competitive but fortunately there is a better way. If you study Olympic-class athletes and delve into the art and science which underpins their accomplishments, you'll find it always comes back to three principles which lead to a person being able to deliver peak performance: 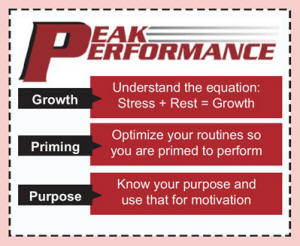 These principles have been used by athletes for centuries to deliver stellar performances but it's the science that underpins them that's universal.