Way of the Wolf

Jordan Belfort has been hired as a sales systems consultant by more than fifty public companies. His life and career were immortalized in the movie The Wolf of Wall Street starring Leonardo DiCaprio which described how in the 1990s Jordan Belfort built a dynamic and successful stock brokerage firm where he earned more than $50 million a year before his spectacular fall from grace. Jordan Belfort is today a best-selling author, motivational speaker and entrepreneur. His proprietary sales-training techniques and legendary daily motivational speeches have been written about by virtually every major newspaper in the world including The New York Times, The Wall Street Journal, The Los Angeles Times, The London Times, The Herald Tribune, Le Monde, Corriere della Serra, Forbes, BusinessWeek, Paris Match and Rolling Stone.

"Straight Line Selling" is a sales methodology which was originally developed in the boiler rooms of penny stock sellers and used to sell millions.

The essence of the Straight Line Selling system is nobody will ever buy from you until you have created three certainties in their mind and provided two different types of motivation: 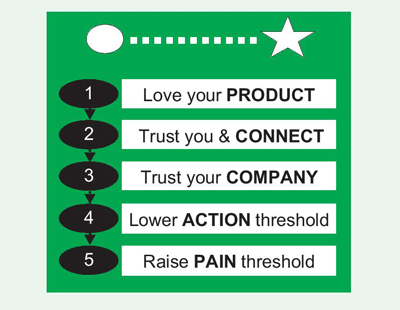 Every sale is the same, regardless of what you sell. Create those three certainties in the prospect's mind and they will buy. Fail to do that and they will not. Anything else is just an optional extra.